Generally speaking, the Hyper V user-base – not to mention the wider VM user-base – is extremely large. Correspondingly, there are a lot of different backup solutions for it that have unique features, services, and more. However, it may be quite a surprise for a lot of people that you can actually backup your Hyper V VMs natively if you’re using Windows Server 2012 or newer. Not only this, but it is a relatively simple process that requires little to no configuration. It is not ideal to use as a main VM backup source, but can be useful as an additional, dedicated option in certain situations.

This Hyper V backup solution itself is called Windows Server Backup and it can be installed as an additional feature from Server Manager. Both Windows Server Backup and other third party solutions are using snapshot technology to create these backups. A snapshot (or a checkpoint) is a state of the VM in a specific point in time, and it can store virtual disks state, RAM contents and VM-specific settings.

It is worth noting that the cloud backup is also possible with this tool, when configured properly. However, for the sake of showing the basics behind the process, we’ll focus more on the local VM backup process.

After launching Windows Server Backup, you’ll be able to right-click the “Local backup” line, and you’ll see a number of different options there, like “Backup once”, “Scheduled backup”, and more. Scheduling backups is somewhat more complicated, that’s why we’re going with “Backup once”.

A good example of a simple console command to create a backup of a VM called “Server 1” to a specific folder on disk C: would look like this:

Moreover, if you want to backup two or more VMs at once and to have backups saved in a network-shared folder (external NAS storage, basically), the command should look like this:

Or if you want to simply see the list of backups that are already created and registered within the system, you’ll have to input the following command:

While Windows Server Backup is a solution that is simple, reliable and fast solution for Hyper V backup purposes, there are several serious drawbacks to it, as well:

Windows Server Backup is a reasonably good way of creating backups of many users´ VMs, but it has some serious drawbacks that prevent it from being used as a primary backup solution in many enterprise environments – this role would still stay with third-party solutions. 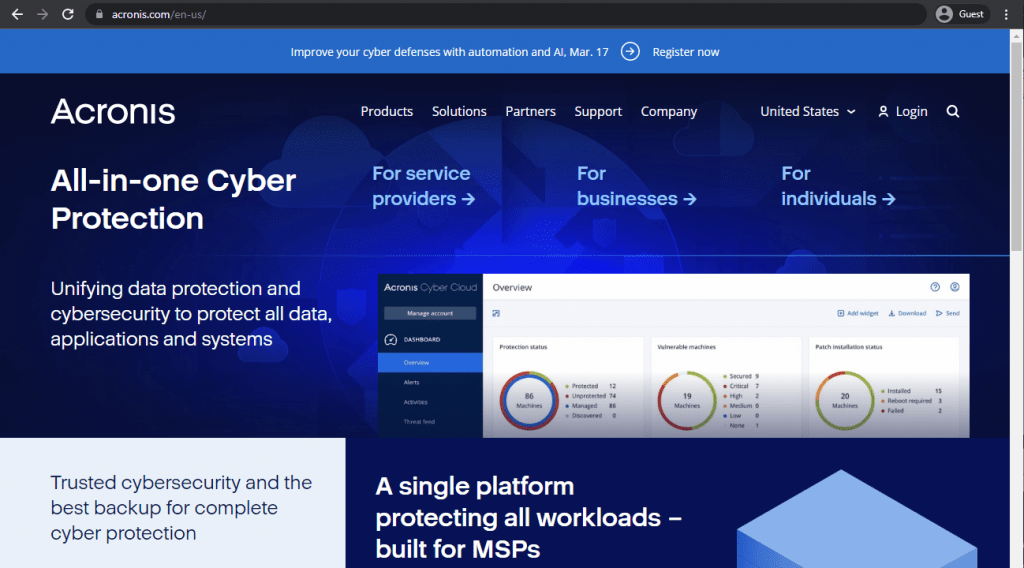 Starting off with a well-known player in the backup solution market, Acronis Cyber Backup is a data protection tool for all kinds of environments, from physical and virtual to cloud, mobile, and more. It is reasonably scalable, capable of providing agentless Hyper V backups, offers a centralized console for management purposes, can provide automatization tools, supports VSS, RCT, vmFlashback, and other technologies. 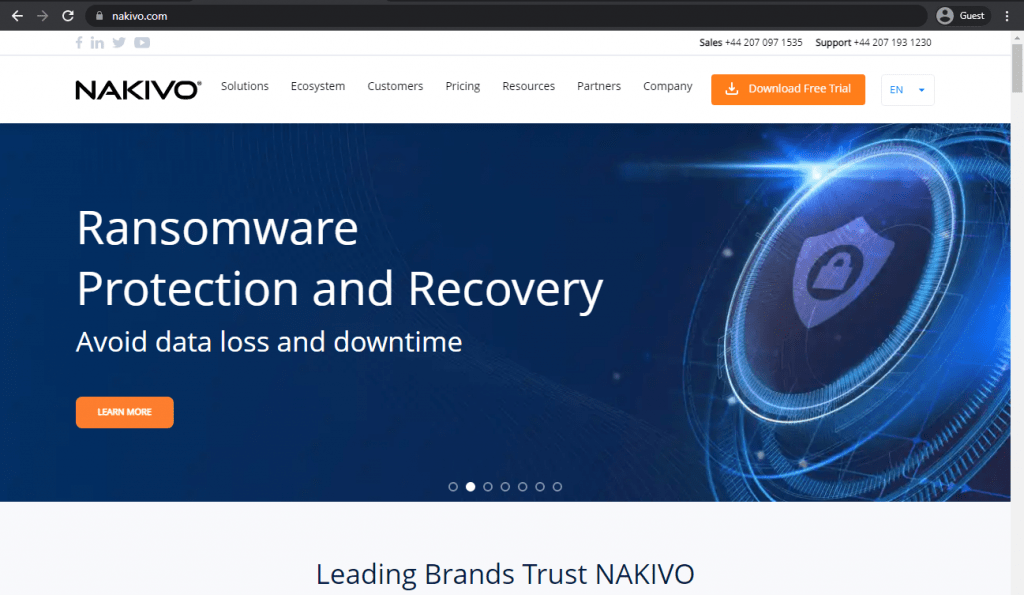 As a software development company, the main goal of NAKIVO is to provide data protection solutions for various types of environments. As such, NAKIVO Backup and Replication is a data protection tool that specializes in app-aware image-based backups. Its recovery features are also noticeable, offering everything from granular restoration to full VM/app recovery. There’s also support for different platforms and environments to recover data to, as well as cloud backup, local tape backup, and more. 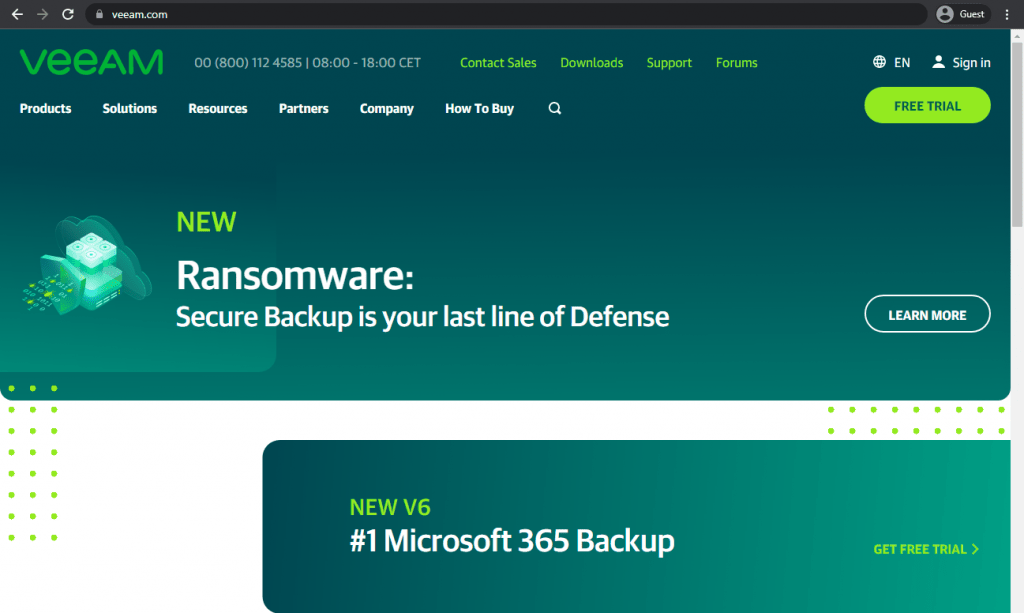 Another interesting solution that offers image-based Hyper V backups is Veeam – a highly versatile backup platform that can work with VMs, cloud workloads, as well as physical servers. It offers both a regular full VM backup, as well as a CBT-based incremental backup (Changed Block Tracking). There are also app-aware backups, regular backup health checks, scale-out backup repository as a feature, and so on. 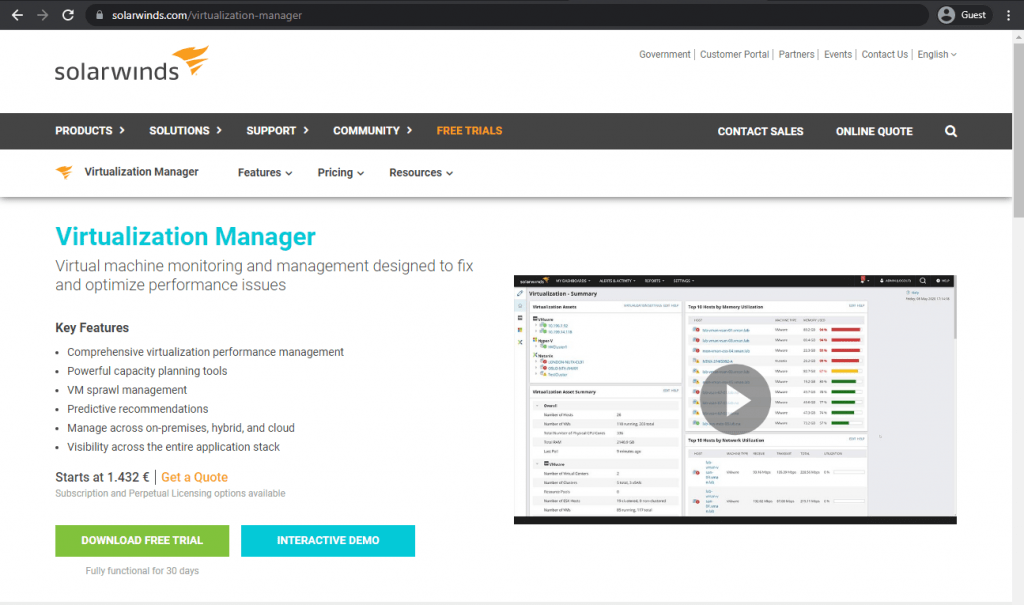 A first solution on the list that does not offer everything at once, but rather specializes in a single area – SolarWinds Virtualization Manager is a versatile management platform for virtualization environments that exists to find and resolve a range of issues in VM environments. It has a centralized dashboard, a contextual dependency map, can offer useful predictions and insights based on existing data, and more. 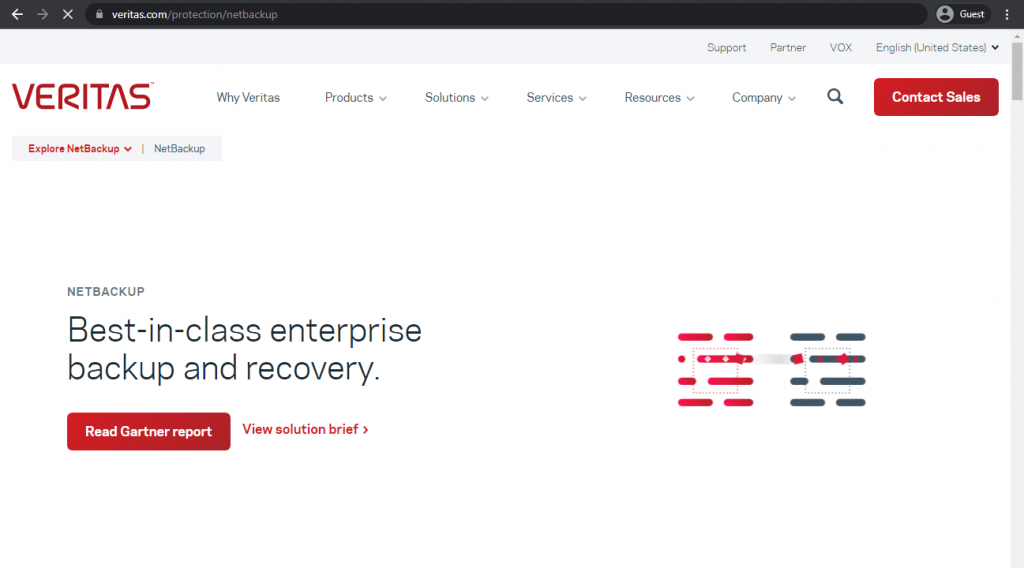 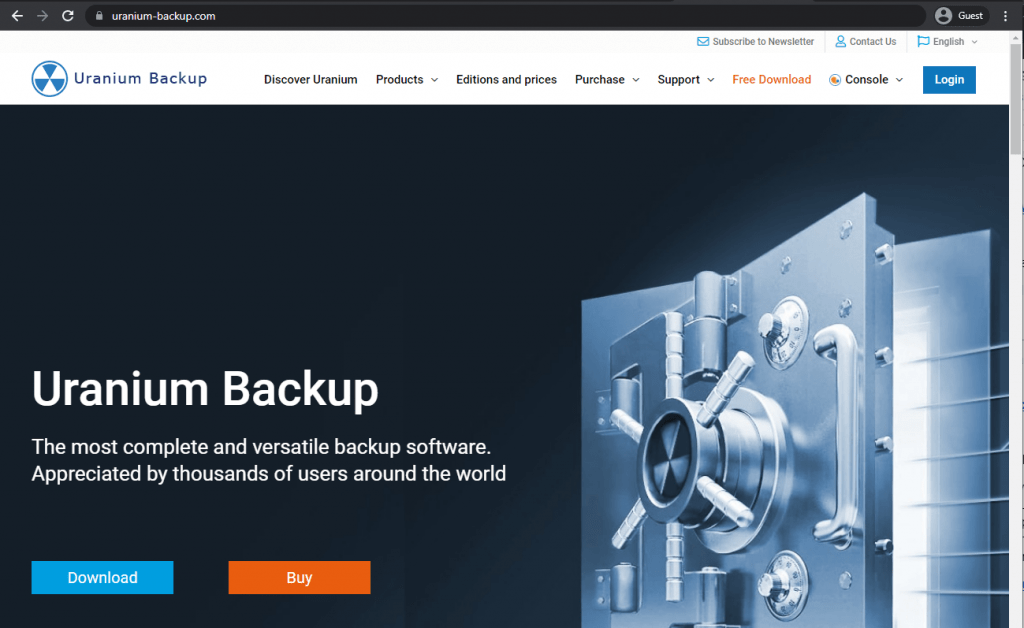 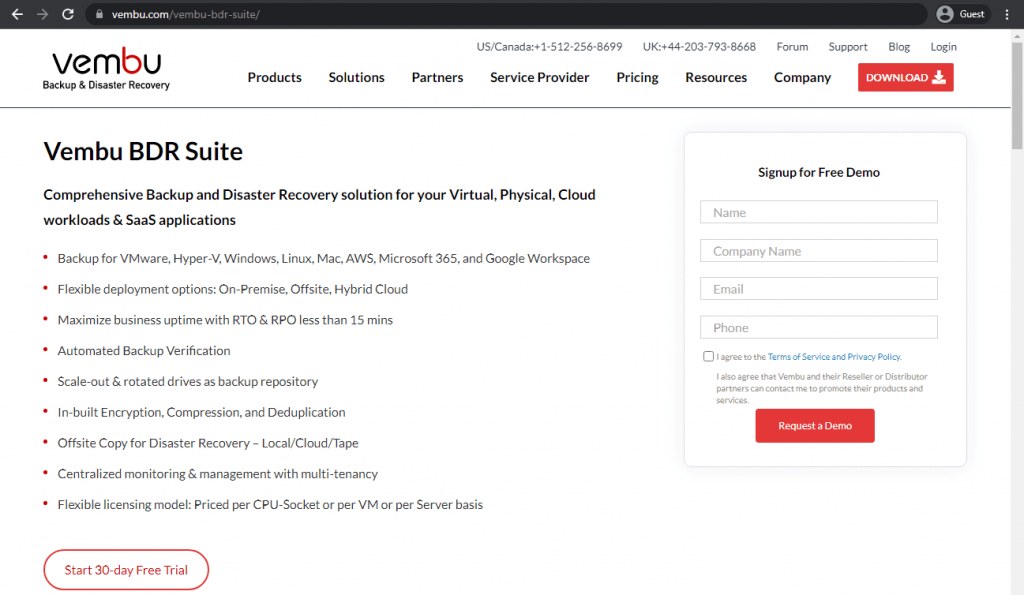 Vembu Backup & Disaster Recovery (BDR) promotes itself as a complete suite of backup features for all kinds of workloads, from physical and virtual to cloud and SaaS. It creates agentless VM backups for Hyper V, allowing for the backups themselves to proceed no matter if they are running locally, or using S2D/CSV/SMB. Its incremental backups also support RCT (Resilient Change Tracking) for Hyper V, offers cross-hypervisor migration (V2V), and more. 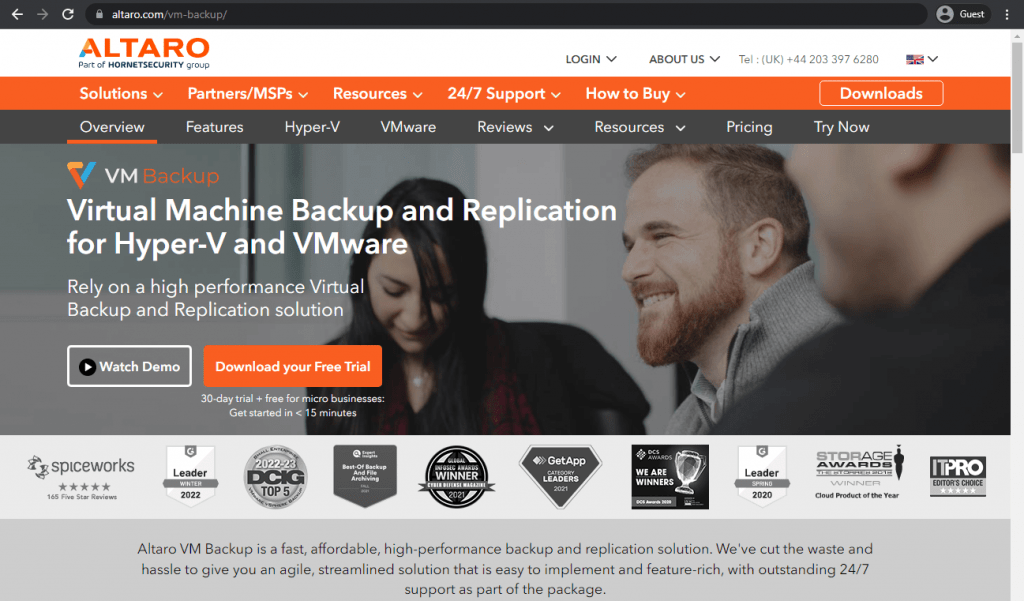 Ease of use is one of the prime advantages of Altaro VM Backup, which is a flexible VMware and Hyper V backup software that also works with physical servers. It also claims to be able to work with smaller VM environments and scale to larger MSPs, if necessary. There is also a centralized console, a simple backup server setup, support for a variety of cloud storage locations, and the ability to quickly backup environments thanks to their own ´Augmented Inline Deduplication´ technology. 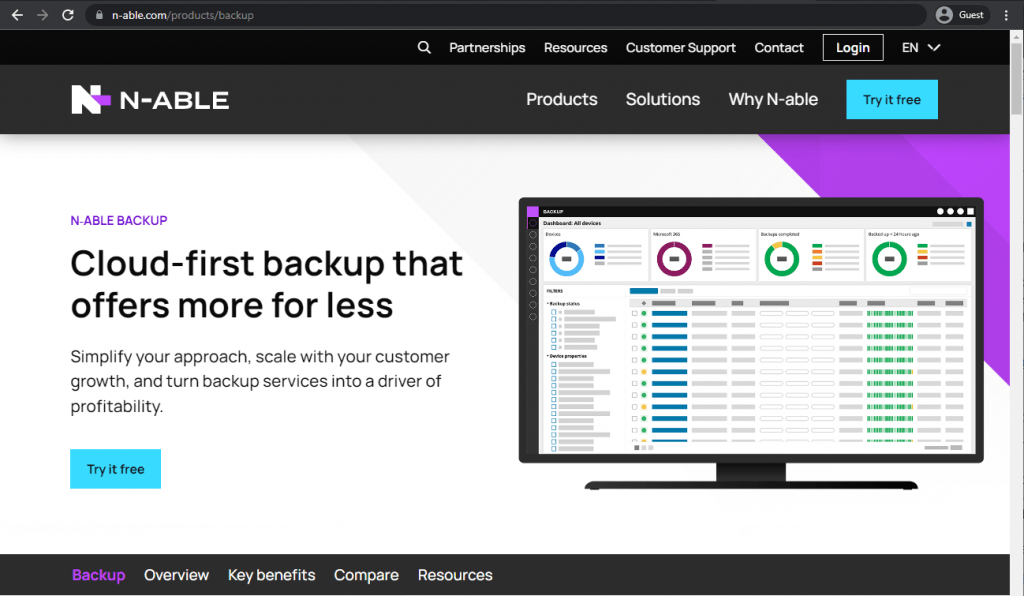 One more relatively unique example on this list is N-able Backup – a SaaS backup and recovery platform with Hyper V support. It can also work with VMware systems and multiple different cloud services (Microsoft 365, for example). N-able can also act as a centralized management console for multiple sites or multi-vendor sites, and works with other cloud accounts. Both the data in backups and the data in the management console are encrypted with the AES-256 key, offering a safe and secure way to manage Hyper V backups. 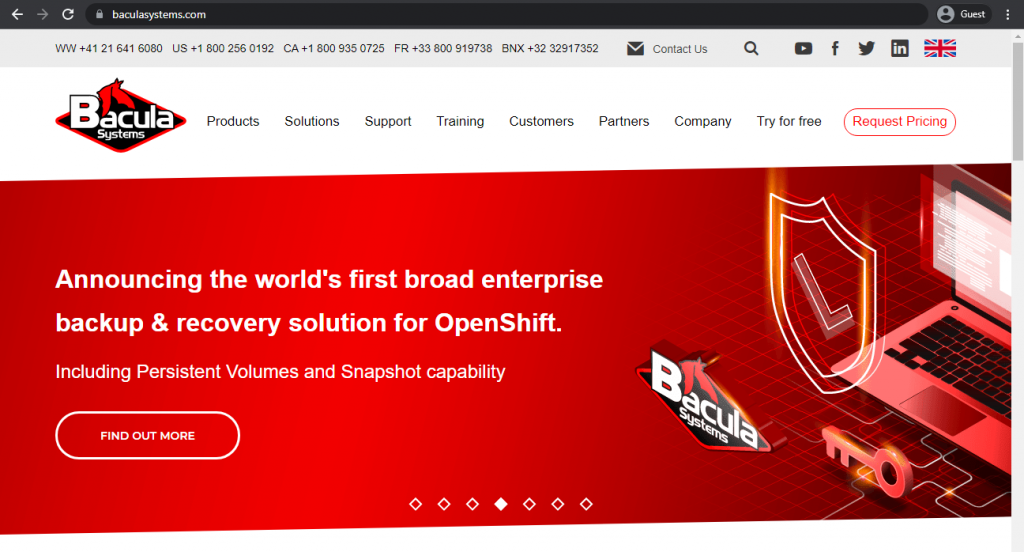 Bacula Enterprise is another example of a multifunctional backup and recovery solution that supports many different use cases and backup target locations. Bacula Enterprise is a solution that is made for higher scalability than most other solutions discussed in this article- and as it is designed for meduim and large enterprise use, tends to offer deeper capabilities for security, customizability, feature-depth and specialised support services. Its Hyper V module is no exception; some of its capabilities are listed below together with a closer look at it s qualities:

As for the actual process of how Bacula Enterprise works – there’s a single plugin that is included in Bacula Enterprise called vss-fd.dll. It enables interaction with a variety of components on Windows-based systems for various purposes. One such component is the Hyper V server or servers.

Both backup and restore jobs are possible for Hyper V VMs with Full level backups. Since Microsoft itself doesn’t support either Incremental or Differential backup for Hyper V servers – there’s no way for Bacula to do that. At the same time, some specific features like global endpoint deduplication or bothsides FileSet option allow the solution to compensate some of the obvious drawbacks of Full backup as the main backup method.

Of course, everything begins with the configuration step. You’ll have to put a specific command into the Include section of the File Set that you want to use to backup the Hyper V server, this command should activate the Hyper V component of the solution.

This should enable you to backup all of the Hyper V VMs. The step above also has the purpose of specifying the plugin directive that you should set beforehand, and your job may or may not have more than one of the vss components specified.

Double check that your vss-fd.dll plugin is in the Plugin directory that you’ve chosen in the general solution installation process, and that the Plugin Directory itself is specified in the Bacula config file called bacula-fd.conf. An example of the status output from a solution with VSS plugin set properly is shown below.

If the entire process above is performed correctly, you’ll have the ability to include the Hyper V data in the backup from now on. The files that you’ll get as a part of the Hyper V backup should appear in a bconsole or in a bat restore in the following form:

As for the VSS-enabled components, it’s a specific person’s responsibility (namely, the administrator’s) to be absolutely sure that the VSS snapshots are getting created by specifying at least one directory or one file for each drive that has the data handled by the plugin.

There’s two general mechanisms that describe the ways that Hyper V may handle the subject of performing VM backups. There’s the “Offline” method and there’s an “Online” method.

The “Offline” method is also called the “Saved State” method and it’s usually the default mechanism for Hyper V backups. The way it works is that a VM in question is put into a saved state in the preparation stage, a snapshot of the required volumes is taken and then the VM is running again in the post-snapshot stage.

And then there’s the “Online” method, also called “Child VM Snapshot”, it uses a VSS inside the child VM to perform the actual backup, but there’s a few conditions that need to be met before the process begins:

It is possible to know that’s the current set backup mode for your VM by typing the following command for Windows 2012 R2:

The VM restore process, on the other hand, is handled entirely by the OS of the host, without involving VSS writers from inside the child VMs. Here’s how this process works:

The Hyper V VSS driver does not get the VM re-created if it’s an “Offline” VM that is restored. Fortunately, this process can be started manually with the “New-VM” powershell command, as follows:

It’s also possible to restore VSS files directly to disk without interacting with the VSS restorative framework. It is done via Plugin Options menu by setting the without_vss option to “true”.

There’s also the matter of file level restore when it comes to working with Hyper V backups. You can restore a set of files from your Hyper V VM backup without restoring the entire VM, it is done my restoring VHD files in a directory with the usage of without_vss plugin, it allows to mount those files within the system and access them like any other physical disk (the mounting is possible via the Powershell command Mount-VHD or the Server Manager Console).

It is advisable to perform the restoration of VHD files on an entirely different system to avoid compatibility problems in the restore process. If your without_vss option isn’t set up properly, you’re risking losing the original VM to the Hyper V’s automatic deletion during the restore process.

Bacula Enterprise is a strong choice as a primary backup solution for your Hyper V VMs. As a heavy-lifting enterprise solution, aimed at large organizations with large and complex data environments, Bacula offers a lot of different capabilities, especially in terms of customization, scalability, reliability and above all, security. 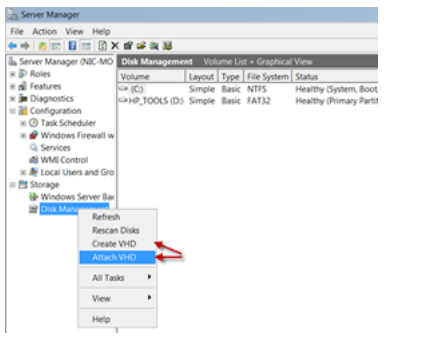