This automated Kubernetes backup is Bacula’s second step in recent months towards full orchestration integration. It is available at most subscription levels of Bacula Enterprise at no additional cost for a limited period of time. 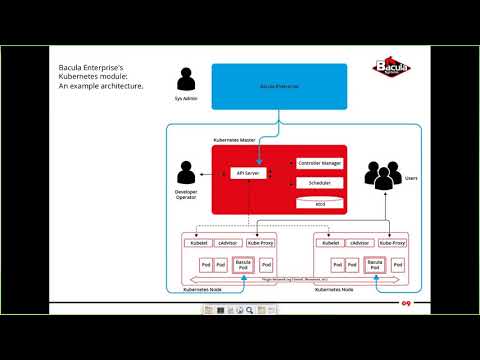 Some of the benefits of Bacula’s integrated Kubernetes backup and restore module include:

Bacula Enterprise also offers advanced backup for Docker containers, including external volumes. Effective Kubernetes backup and restore is especially important because when a container’s life ends, there may be data in it that is needed. However, due to the challenging nature of a containerized environment, other backup solutions cannot, as of today, perform simple and efficient backup of Docker containers – and in nearly all cases, not at all. Bacula is the only solution to provide fully automated Kubernetes and Docker backup.

Effective DevOps environments must be scalable and automated wherever possible. Bacula Enterprise is designed to be stable, reliable and highly scalable and its container modules are aimed at easing the workloads of IT and DevOps departments using Docker, Kuberbetes, SUSE, Caas or Openshift. It makes Kuberbetes safer and more convenient to deploy than ever before.

Whether your deployed container environment is used for lift-and-shift of monolithic applications, or refactoring legacy applications, or building new distributed applications - developers and Systems Administrators can use Bacula's advanced technology with an especially high level of flexibility – via either Bacula’s GUI or command line interface. Remember, this high level of flexibility and customization possibilities are fundamental to Bacula’s approach: to empower the user by introducing a wide range of options to her/him you achieve their aims.

As containers are increasingly deployed in mission-critical operational environments, organizations are increasingly becoming concerned with security, backup and recovery, and other data management issues. Initially, the majority of containerized applications were stateless, which allowed them to be more easily be deployed on a public cloud. However, as stateful applications that require access to a database have become containerized, the need to seriously consider backup and recovery has increased dramatically. Typically, an IT department’s concerns for deployed container environments are now largely around data security, data loss and planning for disaster recovery and business continuity.

Whether containers are being used in a deployed environment to give a new lease of life to monolithic applications, or refactor legacy applications, or implement new dynamic distributed applications, the need to protect its stateful data remains. An organization’s need to maintain SLAs, and ensure container-based services are always available in a correct state, will always be top of mind. Therefore, a minimum viable Kubernetes distribution requires effective backup and recovery of cluster components and persistent data for productive operation.

For organizations running containers in production environments, Bacula Enterprise is the first enterprise backup and recovery platform that provides an enterprise-grade solution for an organization with deployed Kubernetes clusters to back up and recover data consistently across all its platforms.

Bacula brings agility benefits to container environments because of its unusually high degree of modularity and flexibility. For example, Bacula can also make it possible to migrate persistent volumes between Kubernetes clusters – e.g., at the restore time, you can specify another Kubernetes system to write to. This agility in turn offers organizations the opportunity not only to save time, but also to significantly reduce complexity, costs and vendor lock-in.

Many organizations have deployed containers on least two of three major public clouds, and a good proportion of those running containers on Amazon Web Services (AWS), Google Cloud Platform (GCP) and Microsoft Azure. Bacula’s native integration with these cloud platforms help to speed and ease operations in these environments. Bacula also helps companies to avoid being locked into a single vendor, because apart from its own open source-based code, it also facilitates containers to be more easily moved from one cloud to another. Bacula also facilities Hybrid cloud via its ease of integration of private and public cloud services to support parallel, integrated or complementary tasks.

For What Uses Should Kubernetes Environments Be Backed Up?

People using Kubernetes in production typically need a real strategy for restoring and upgrading clusters. In the case that a cluster goes into an unrecoverable state, backup of the config file and its persistent volumes is required to revert back to the previous stable state of the Kubernetes cluster.

Kubernetes cluster-level backups give DevOps teams the tools to back up and restore their entire Kubernetes clusters (automatically) and restore them with a single action to a known good state to minimize production interruption. Bacula Systems asserts that speed and efficiency of restores always needs to be considered, even in a highly automated and resilient containerized environment.

Overall, Bacula Enterprise’s unique solution for Kubernetes backup and recovery both safeguards critical data and enables developers to be more productive. It helps to streamline the workflow of a DevOps environment through to deployment of mission-critical systems. However, there are four main reasons why an IT department will likely be able to benefit from having Bacula Enterprise’s backup and recovery mechanism in place for its deployed Kubernetes cluster.

Bacula Enterprise’s Kubernetes module can backup a number of Kubernetes Resources, including: 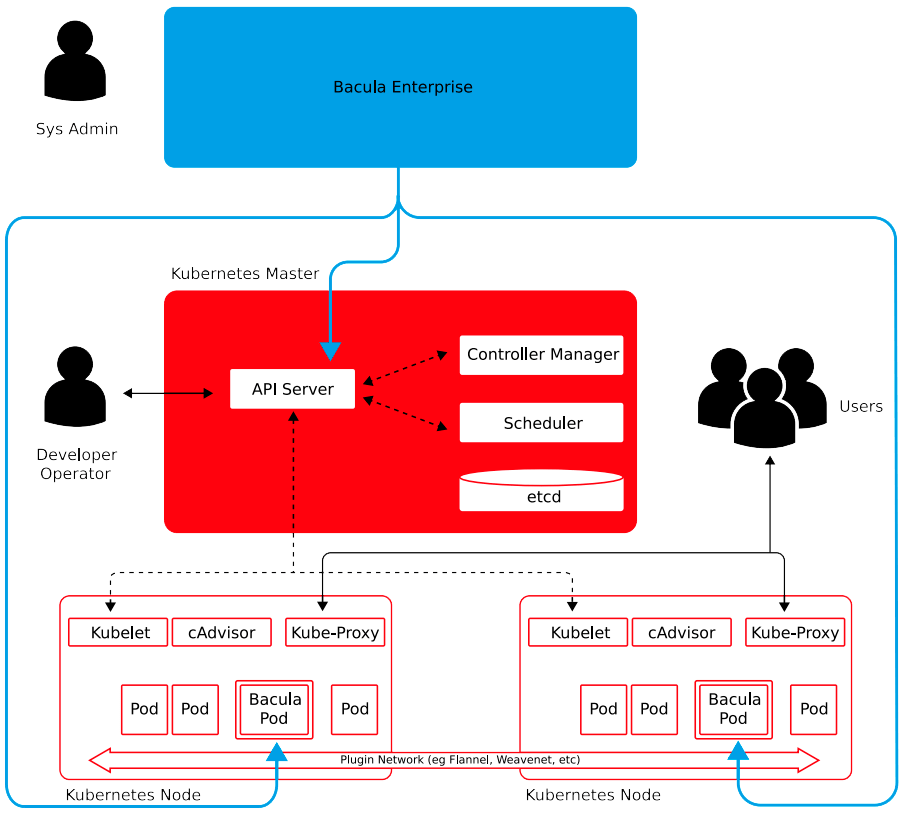 The Kubernetes backup module provides a choice of two targets for restore operations:

To ensure best practice backup and recovery for Kubernetes container environments, data should be backed up automatically and system administrators should test backups regularly to make certain that they will do what is needed when recovery is necessary. 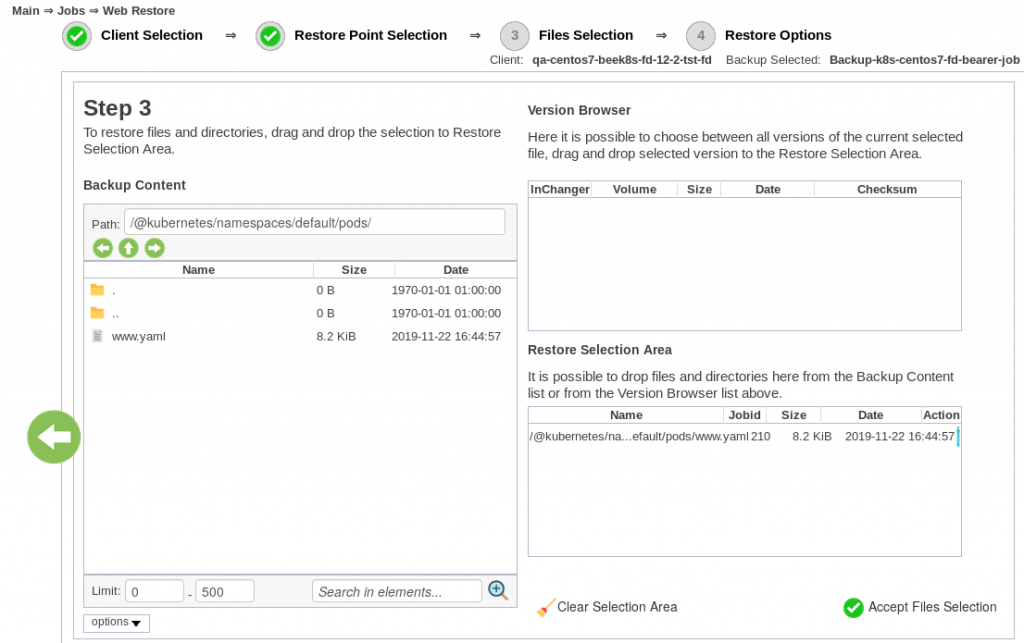 The feature uses the special .ls command command with a plugin=<plugin> command parameter. 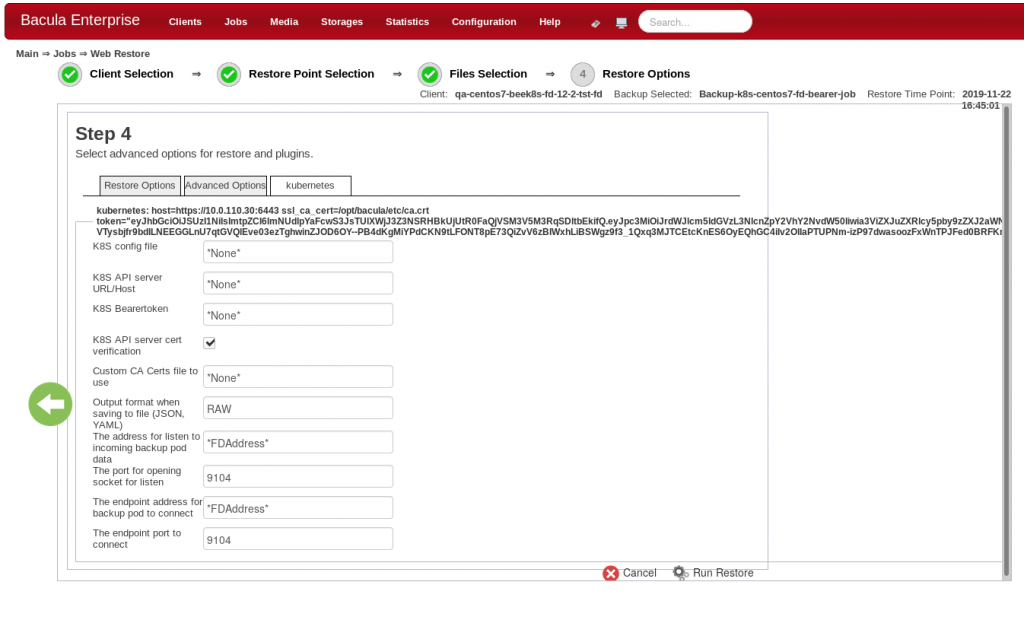 Most traditional backup and recovery solutions were designed with a classic approach to application in mind, when the application itself runs within a server with the OS installed, as well as separate storage and memory.

More modern cloud-native applications work on an almost entirely different basis, creating a whole new architecture that provides a framework for applications to be created and delivered with, and at its core is a set of micro-services that - when put together - create an app. This change allows developers to have much more innovation and scalability for their application as well as improved deployment, but on the other side there’s a need within the completely new backup structure for this entire system to work properly without a risk of losing data after some sort of failure.

Since the data itself in cloud-native applications can be classified as ephemeral, and works using a set of containers, management is needed. The most popular management system today is Kubernetes (K8s). The core of this management system is called etcd, and it stores all of the Kubernetes current state info as well as container cluster configuration information, meaning that any change within the system that is Kubernetes is reflected in that etcd part.

That brings us to the first challenge of backing up with Kubernetes – since the nodes themselves are disposable and typically last only around a day, it would be easy to restore them in case a disaster wipes them out. The problem is that the restored nodes would have no previous data whatsoever and would have to get that data from etcd – which would have to be backed up frequently and efficiently for the whole system to operate properly after something happens, since etcd itself can be compared with the whole development system’s neural system, containing the knowledge of the infrastructure in general and the placement of persistent volumes that have data that may need to be stored somewhere.

Additional troubles may arise in other cases, as well – for example, migration from one cloud service to another requires the backup system to be granular, since it is likely some things in a users previous cloud-native structure would have to change if your new cloud service has a different structure. You may not need to restore the entirety of etcd, or to restore the entire Kubernetes environment in that case – that’s where the need to be granular comes in. Another need for a granular job may arise if a part of your system is corrupted in the process of migration or for any other reason – it’s highly likely that you would only need to restore that one specific part of the system instead of rewriting everything to restore one small part.

The current day’s app development cycle brings one more concern to mind – it is typical for applications to be tested in a sandbox environment that is isolated from the rest of the system (namely, production environment, that’s already interacting with customers). In this specific case those environments (dev and test environments) would have to get “hydrated” with application data to provide meaningful test results. These scenarios allow specific containers or volumes to back up a current production environment and restore it over at the test environment – meaning that you’ll need to tag a part of your infrastructure to backup at one place and restore it in the other location or environment.

A lot of those considerations - while kept in mind - should bring you to a point when the system is ready to deploy proper backup and restore jobs on various system components. This is typically handled by highly frequent snapshots, which unfortunately has the side effect of creating the need to easily navigate through all of the previous snapshots to find the best restore point at any moment.

In summary, there is a significant difference between classic backup and restore requirements and those same requirements in a modern app-development environment. Companies will have to be more agile, and adapt one way or another to find creative ways to succeed, and remain competitive in their markets.

Who needs to know about Kubernetes backup capabilities?

The person responsible for operationalizing Kubernetes clusters needs to understand clearly the importance of their organization’s need for backing up - and more to the point - quickly and easily recovering Kubernetes and Kubernetes clusters. A good example of the type of person within an organization that would need to be directly concerned with ensuring that backup and recovery is enabled when a deployment is operationalized would be a ‘DevOps Lead’, a ‘Platform Engineering Lead’, or a ‘Platform Ops Lead’. Of course, in a wider context, there are many stakeholders within the hierarchy of an organization that have a responsibility to ensure that their company’s data is safe.

Bacula Enterprise’s licensing model is not based on data volume. This means that users are free to have increasing data volume, but without increasing costs from Bacula. One annual subscription fee provides the user with everything needed from Bacula, vastly simplifying the calculation and making it easier to predict what costs will be in future. Bacula’s rapid recovery times, coupled with robust stability, reliability, high automation levels and ease of use translate into clear monetary advantages. 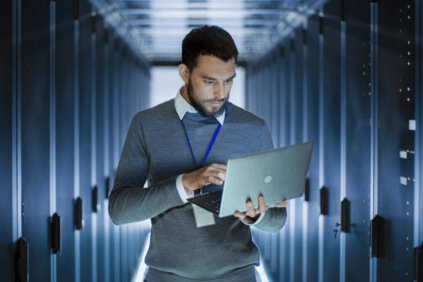 Take a deeper look at the internals of our backup software. See the exact solutions including the software code itself. 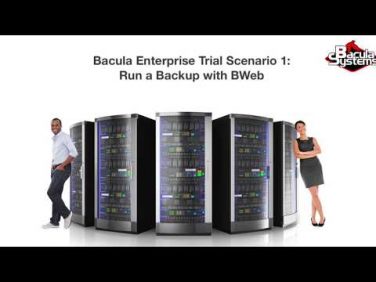 These video materials help the new Bacula users to get acquainted with the basics of our enterprise backup software. 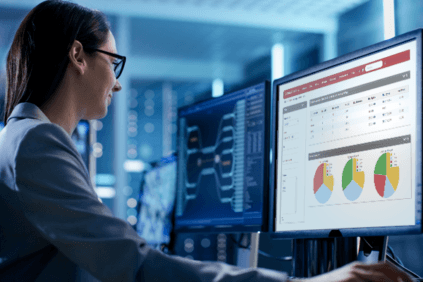 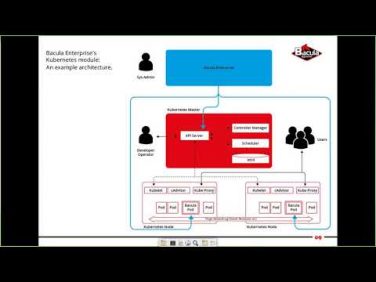 Shifting to the Modern Backup
How to shift to a modern backup and recovery solution?