Bacula Enterprise is the world’s first enterprise class backup and recovery solution to offer advanced, automated backup of Docker containers. Its Docker backup module takes container ease of use to a new level. This world-leading technology has now been further updated to also include Docker volume backup and recovery.

This module is integrated via the Docker official API and means users can rapidly and easily backup multiple Docker containers without having to install an agent inside each container. This automated external Docker volumes backup is part of Bacula’s capability for full orchestration integration. It is available at most subscription levels of Bacula Enterprise at no additional cost for a limited period of time.

Whether your deployed container environment is used for lift-and-shift of monolithic applications, or refactoring legacy applications, or building new distributed applications – developers and Systems Administrators can use Bacula’s advanced technology with an especially high level of flexibility – via either Bacula’s GUI or command line interface. Remember, this high level of flexibility and customization possibilities are fundamental to Bacula’s approach: to empower the user by introducing a wide range of options to her/him you achieve their aims. 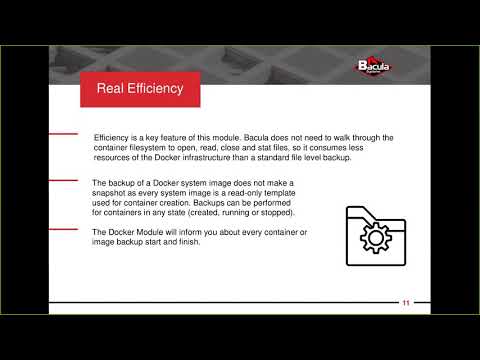 Bacula Enterprise software is designed so that organizations can deploy this Docker backup solution for their entire physical, virtual, cloud and all hybrid environments, regardless of architecture, all from a single platform.

Effective Docker backup and recovery is especially important because when a container’s life ends, there may be data in it that is needed. However, due to the challenging nature of Docker environments, other backup solutions cannot, as of today, perform simple and efficient Docker container backup – and in nearly all cases, not at all. Bacula is the only solution to provide fully automated backup of Docker and its data volumes. 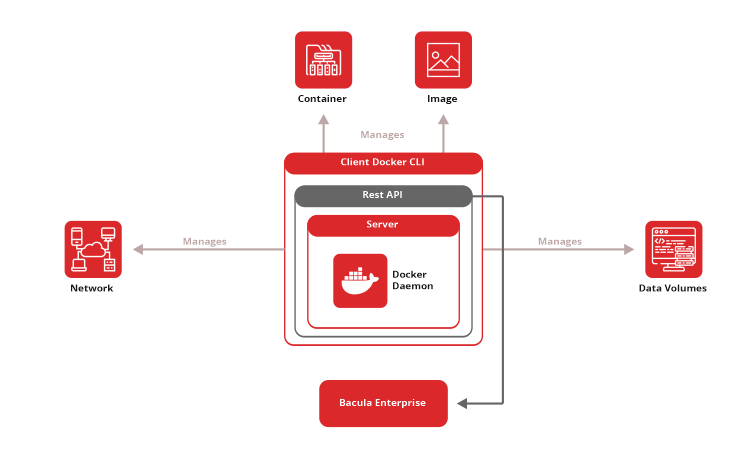 Safe & Efficient Use of Docker Containers

Bacula Enterprise makes the usage of Docker more reliable and convenient. It is even possible to backup Docker defined images only, which can be used to create new containers when required. Our automated and scalable solution was made to support the workloads of both IT and DevOps that use Docker, SUSE, Caas or Openshift.

Systems administrators and DevOps managers benefit from the high level of control and management flexibility available via GUI or web interface of Bacula Enterprise when performing Docker backups incl. its data volumes.

Beware of Other Vendor’s Claims

Some backup and recovery vendors are claiming to be able to backup Docker incl. its volumes. They are extremely limited, however, and simply add a container with their client service to a containerized application, and use that to backup the specific, required data. With these solutions, there is no straightforward, application-independent restore process available. So how to backup Docker in this case? The administrator needs to rely on careful manual configuration, though, as well as understand the relationship of persistent storage entities; which application they belong to, which containers use it, and so on. In short, it is a workaround – not an effective and fast solution.

The backup of a single Docker container consists of the following simple steps:

The backup of a Docker system images does not make a snapshot as every system image is a read-only template used for container creation. Backups can be performed for container in any state (created, running or stopped). The Docker Backup Module will inform you about every container or image backup start and finish:

The Docker backup module will create a single (.tar) file for any container or Docker image which is saved. Inside Bacula, those are represented as follows.

Multiple files will be created during a backup if multiple containers or Docker images are selected for backup with one job. The distinct file names as shown above allow to locate the proper container or system image archive for restore.
To list available Docker containers or system images, a listing mode is available, described in chapter 6.1 on page 12.

To use this restore method, the where= or  where=/ parameter of a Bacula restore command command is used.

The default container name or container image label can be changed during a restore with the container_defaultnames or container_imageid restore parameters (see section 4.2 on page 8).

To use this mode, the where=/some/path Bacula restore parameter is set to a full path on the server where the Docker Module is installed. If the path does not exist, it will be created by the Bacula Docker Module.

The module is configured using module parameters defined in a FileSets Include section of the Bacula Enterprise Director configuration.

These optional module parameters are relevant only for Backup and Estimation jobs:

During a restore, the Docker backup module will use the same optional parameters which were set for the backup job and saved in the catalog. Some of them may be changed during the restore process if required.

container_create: <yes|no> specifies if Docker container restore should automatically create a container. The default option is to create containers on restore. If containers are to be restored as images, this parameter should be set to no.

If this parameter is set to yes, then the container_create parameter will be ignored.

container_imageid: <yes|no> specifies if the Docker Module should use the image id values to create or run restored containers. The default is to use image repository and tag values for this purpose. This parameter will be ignored when both container_create and container_run are set to no as no container create or run operation will be performed.

container_defaultnames: <yes|no> specifies if the Docker Module should setup container names based on original container name and JobId values, which is the default. If this parameter is set to yes, the Docker service will setup default names for created or run containers.

In the example below, all Docker containers and images will be backed up.

In this example, a single Docker container with name-label of “mcache1” will be backed up.

The same example as above, but using container id instead:

In the following example, all Docker containers which contain “ngnix” in their names will be backed up.

In this final example, all Docker containers except those whose names begin with “test” will be backed up.

Restore to a Docker service

To restore a container or image to a Docker service, the administrator should execute the restore command and specify the where parameter as in this example:

and then set any other required restore module parameters for the restore. In the following restore session example, the container_run plugin restore option is set to “Yes”:

The restore job log will indicate which container is restored and which new container id was created:

It is possible to restore the container images and Docker template images data to a file without loading them to Docker service. To do so, the where restore option should point to the local directory:

The restore job log will show that the restore was done to a local directory. The log above was truncated for a clear view.