Nicolas Van Eenaeme
Director of ITS, Netlog
«As we grew, backups were taking longer and longer to complete. We then decided to take a support contract with Bacula Systems. They have helped us in optimizing our configuration, and now backups are completed almost twice as fast as before.»

Netlog is an online platform where users can keep in touch with and extend their social network. It is an online social portal, specifically targeted at the European youth. It is developed by Netlog NV, based in Ghent, Belgium. Netlog is currently available in 37 languages and has more than 63 million members throughout Europe, and this number increases every day.

Netlog has been a very active user of open source for a long time. It needed to find a product that suited its needs and that was also flexible enough to support its many different systems,
‘We started to implement Bacula by ourselves, but when the backup environment became more complex, we felt the need to get in touch with the experts’, said Netlog’s Director of ITS, Nicolas Van Eenaeme. ‘We have an enormous amount of data that needs to be backed up daily and with different retention periods. Our data is constantly growing, so we needed a solution that scales very well’, added Van Eenaeme.

Before 2008, backups were made using self-made scripts. This was not a complete automated backup solution and there was a huge continuous growth in the amount of data that needed to be backed up. ‘Most of our applications run on open source software, so we evaluated Bacula as being a complete backup solution that provides us all the features we want without using proprietary software’ said Van Eenaeme.

So what was the main decision criteria? ‘Just to make sure everything works, and that it gets backed up fast enough’, says Van Eenaeme.

‘As we grew, backups were taking longer and longer to complete. We then decided to take a support contract with Bacula Systems and use the Open Core solution: Bacula Enterprise Edition. They have helped us in optimizing our configuration, and now backups are completed almost twice as fast as before’ said Van Eenaeme. 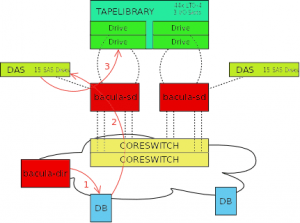 Steps described in the diagram:

‘Because Bacula is flexible, open-source and very widely supported in the community, we could benefit from various available scripts and were able to tweak it to perfectly suit our requirements’ says Van Eenaeme. ‘For example: the integration in our monitoring platform just took us one hour!’ he added.

Netlog now relies on Bacula Systems’ technology and support services to meet its mission-critical data backup requirements. ‘Our data is continuously growing. Bacula is the right solution for us and scales very well. ‘

“We needed to find a product that fitted our needs, and is flexible enough to support all our different systems, so Bacula was the best backup product we could use” affirmed Van Eenaeme.

You may also be interested in:
docker container backup
tivoli alternatives
proxmox backup
We value your privacy
We use cookies to enhance your browsing experience, serve personalized ads or content, and analyze our traffic. If you continue to use this site, you consent to our use of cookies and privacy policy.
Netlog Choose Bacula Backup and Data Recovery We evaluated Bacula as being a complete backup solution that provides us all the features we want without using proprietary software' said Netlog. bs_admin https://www.baculasystems.com/author/bs_admin/ 2012-03-24 2012-03-24
Bacula Systems
Avenue des Sciences 11, CH-1400 Yverdon-les-Bains, Switzerland
+41 21 641 6080 https://www.baculasystems.com